Yeah, I know it’s a little bit late to talk about « Big Hero 6« , but in fact, the movie isn’t out since a long time in France -and yes, I have to admit that I was also waiting for the end of the holidays to avoid children in the room. So finally, here are my thoughts on this movie! 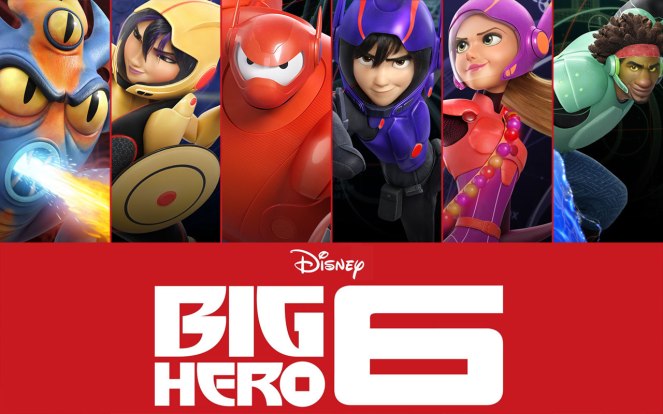 First, let’s talk about the story. Hiro Hamada and his brother Tadashi are two very clever boys who work in a science University. Tadashi creates a nurse-bot called « Baymax » while his young brother proves his cleverness by creating an army of microbots controlled by his brain. Everything was fine until this sad day when Hiro loses his brother in what everybody first sees as a « fire accident ». A « fire accident » where all the microbots disappear. When Hiro learns that the microbots have in fact been stolen, he decides to create his own superheroes team with Baymax as a superbot, Honey Lemon, GoGo Tomago, Fred and Wasabi. Well, I keep it pretty simple and basic without spoiling anything for those of you who haven’t seen it yet.

I’m a huge Marvel fan and I love that kind of Disney movie, so I was ready to really enjoy « Big Hero 6« . Tbh, I haven’t read anything about the movie before seeing it so it was a real discovery and I wasn’t disappointed at all. « Big Hero 6 » reunites everything you need to make a movie that will be appreciated by children and adults. All the characters are specials, Honey Lemon is a crazy scientist with a girly touch, Gogo Tomago is the total opposite, a warrior lady, Wasabi’s like the big guy who’s not so brave and Fred’s the superheroes addict, the « cool » one. Young or not-so-young, you can relate to, at least, one of them and that’s why you will start to smile, laugh or even cry while watching. You’re like part of the team.
« Baymax » is the most important character. He’s the cute one but also the one that you can rely on. Like many robots movie, it’s all about robot’s feelings and robotic friendship. Who can says that he doesn’t want his own « Baymax »? Nobody, I’m sure.

Last but not least, it’s pretty easy to identify the « Disney touch« : the famous good moral of the end. Like I said, I’ll not talk about the end, but it’s an happy one of course. The evil guy (who’s not necessarily the one you think) appears to be not so evil, the desperate cases are saved and death is just the beginning of something new. Sometimes I find happy end a little too easy but not this time. There’s no way I could have wanted the movie to be something else. Like always, friends are friends no matter what, there’s good in every one of us and you have to dream big!

But I still want my own Baymax :(.

Have you watched « Big Hero 6« ?
Do you like Superheroes?
What do you think about Marvel and Disney union?